The perniciousness of political influence on state universities

The title of this post is admittedly a lot stronger than the contents. The Times reports on a piece of artwork (titled “Carbon Sink”) that was removed from the University of Wyoming campus ahead of schedule due to pressure from the coal industry in the state.  The first thing to say about this is that the piece is beautiful, so a big thumbs-up to the artist and the university’s art museum for commissioning it. 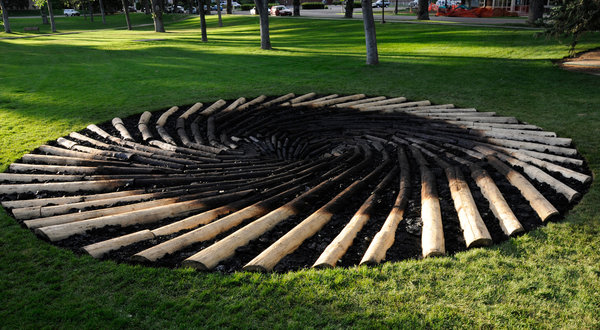 “Carbon Sink,” by Chris Drury (photo by Drury from the New York Times)

The second thing to say about it is that the sort of argument offered by the mining industry in support of the removal is deeply pernicious:

What is this? Marion Loomis, the executive director of the Wyoming Mining Association, said to a university official in an e-mail, using a mild profanity for emphasis. “I am all for freedom of expression, but putting a permanent piece blasting the coal industry while taking millions in royalties, A.M.L. fees and severance taxes strikes me as a stab in the back.” A.M.L., short for abandoned mine lands, refers to a reclamation fee.

This is the same as the argument that stupid people make when pulled over by cops on the highway: “I pay your salary.”  The main difference is the power balance — the mining industry actually owns the state legislature and thus controls the university, whereas idiots making this argument to police officers are just increasing the likelihood of getting themselves in bigger trouble.  Lest you think the first half of the preceding sentence is hyperbolic, here’s the resolution that the state legislature landed on:

Amid the fallout from the controversy, lawmakers passed a measure that requires artwork for a newly renovated campus recreation center to reflect Wyoming’s history of transportation, agriculture and minerals.  The measure also gives Gov. Matt Mead, along with the university’s Energy Resources Council — composed primarily of energy industry representatives — final say on the art selected.

In a generally excellent editorial (which also provides better background than the Times piece) the Casper Star-Tribune editors write:

Education funding should not be gotcha politics. Even more importantly, the University of Wyoming may be a state-funded university system. But “state funded” doesn’t mean state endorsed. Not everything coming from the university should have to pass legislators’ muster. Making education fit a political agenda seems like incredibly bad policy.

This simple point is one that bears repeating, and I’m glad the Star-Tribune editors included it.  The other important aspect of this kind of issue is that state legislators throw around their political weight to ill effect even as they defund the public universities.  I found numbers a little hard to come by, but according to the Washington Post, per-student support at public universities is below $6500 per year, well below what it was in 2000 (which is well below what it was in 1990, etc.). Unfortunately for me and my desire to pontificate, Wyoming seems not to be subject to this trend: the state sends UW a national high of nearly $17000 per student per year, and didn’t cut funding levels between 2000 and 2010.