At one of my origami events I made a new friend, an art teacher at a Boston public school who’s interested in math and origami.  She invited me to visit her school and teach some origami to her students.  (I was also offered free Jamaican food for lunch, so turning the offer down wasn’t really an option.)  In the month since my talk, she’s become quite a talented and prolific constructor of Sonobe art, and one of the things she’s figured out was completely new to me.  In my first origami gallery I described the figures I made by referring to what I call their “underlying geometry”.  In this post, I’m going to try to explain what that means (and so maybe make the descriptions in the gallery more decipherable), show how she broke it, and mention a couple of consequences.

Each Sonobe unit has a rib running down its back.

When three Sonobe units fit together to form one of the triangular pyramids that are so prominent in most Sonobe constructions (the “cube” excepted), these ribs line up so as to form the equilateral triangular base of the pyramid. 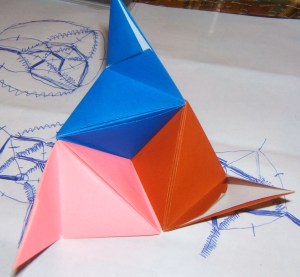 (Though I don’t use this much in practice, it’s also possible to have four units fit together to form a flat square face; in this case, the ribs line up to form the four edges of the face.) 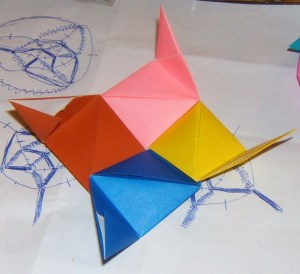 When we use the Sonobe unit to build some elaborate polyhedron, the ribs get trapped inside where we can’t see them.  However, with a little care we can check that they form the skeleton (that is, the collection of edges) of a polyhedron.  This polyhedron is what I call the “underlying polyhedron” associated to the origami polyhedron, and I use the name of the underlying figure to refer to the origami construction.  So, for example, what I call an octahedron really is an “octahedron augmented with triangular pyramids”, or just “augmented octahedron” for short.

(I often use the adjective “stellated” in place of “augmented” because it’s clearer and sounds better, but sadly it’s technically incorrect.)

This identification of the complicated origami with the less-complicated underlying polyhedron is very appealing.  For example,

I find this last feature to be particularly nice, since you can also read off the graph which units will interlock, which allows maximal symmetry in the coloring.

Now let’s get back to where this post started: my friend (perhaps pursuing an artist’s approach rather than a mathematician’s, or having the luck of not having been told very much about the “rules” I’ve mentioned above, or just being cleverer than I, or for some other reason) took the idea of smushing cubes

and did something a little different:

Some of the orange units in the middle have been folded perpendicular to their ribs (instead of being folded along their ribs, like a traditional Sonobe).  This means that some of the “edges” of the “underlying polyhedron” have sharp bends at their midpoints, so they are no longer line segments.  What’s a mathematician to do?  Well, one possibility is to declare this illegal and live a life filled with fewer beautiful things 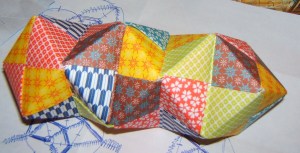 but this seems like a suboptimal choice.  Instead, I’ve decided to make my peace with this construction.  In the two examples above (both straightforward variations on the theme of smushed cubes), one can simply replace the bent edges in the underlying not-actually-a-polyhedron with straight lines; the result will be an honest polyhedron (specifically, a triangular prism).  Unfortunately, it’s not clear to me that this simple fix works in all cases; this construction is quite flexible, so it may not be possible to characterize everything we can do with it.  However, I have other reasons for liking this trick:

This is a torus constructed from 45 Sonobe units, a much more reasonable number than the 96 I calculated I would need to do it without this technique.  It’s also considerably more stable than the 96-unit torus would be because most vertices are incident to relatively few units.

One thing I should mention is that the torus above has pentagonal symmetry.  This suggests that the angle between the faces of two adjacent triangular prisms in the underlying polyhedron should be

.  However, since smushing cubes is equivalent to gluing tetrahedra together by faces (forming what I called in the gallery a “complex” of tetrahedra), this angle really should be the angle formed by the normal lines to two faces of a regular tetrahedron.  A careful geometric argument (drop altitudes from two vertices to the opposite faces; argue that the foot of each is the centroid of the opposite face, that they intersect, and then that the point of intersection divides each into a 3:1 ratio) shows that this angle is

.  So, this isn’t on-the-nose from the point of view of the abstract underlying geometry, but it’s certainly close enough that we can make this out of paper without seeing any distortion.  (I suspect a similar sort of error afflicts my hypothetical 96-unit torus.)

This entry was posted in Math, Origami. Bookmark the permalink.

8 Responses to Sonobe and “underlying geometry”